Dot loses faith in herself when an attempt to free a community of sprites from Megabyte's sector ends with their PIDs (personal ID codes) in Megabyte's control. —ReBoot: The Definitive Mainframe Edition

"Identity Crisis - Into the Great Hall" by Bob Buckley 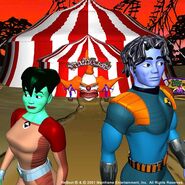