Quick and the Fed

(The) Quick and the Fed

When Bob lets Enzo handle Glitch, he accidentally partially deletes Dot, and Bob must get her Slow Food to reverse the effects. —ReBoot: The Definitive Mainframe Edition

At Silicon Tor, Megabyte's virals are using a magnetic field emitter to open a way to the Supercomputer. Bob shows up, cuts the emitter's power, and stows its magnet in a shielded container. Evading Megabyte, he leaves.

Bob joins Dot and Enzo at Dot's Diner. Enzo asks about the magnet; there is a brief panic among the patrons before Bob assures them that it's shielded. Bob allows Enzo to try using Glitch. Enzo turns Glitch into a hammer, a flashlight, and a jackhammer; this last shakes up the entire Diner, and Bob recalls Glitch. The shaking causes the magnet's case to fall off the counter and be knocked open, and the magnet is attracted to Dot. Bob re-stows it, but Dot has already been partially erased. Cecil tells Bob that Phong would know how to reverse the damage, and Bob goes to consult him.

In the Principal Office, after being required to beat Phong at Pong, Bob tells him the problem. Phong advises him that Dot needs "slow food" to return her to normal, and warns him that "any shock or sudden movement could completely destabilize her."

Back at the Diner, Bob says that Phong directed him to Al's Wait 'n' Eat on Level 31. Dot says that it is too dangerous, and tries to tell him to vidwindow someone, but her speech is too impaired to get through the sentence. Enzo wants to go with Bob, but Bob tells him to stay and look after Dot.

Bob arrives at Al's and attempts to place an order, but Al's Waiter tells him to take a number. Bob takes number 4096 (in binary) just as number 3 is called.

At the Tor, while the magnetic field emitter is being repaired, Megabyte sends Hack and Slash after Bob.

At Al's, Bob loses patience with waiting. Hack and Slash arrive looking for him, although Al's Waiter initially assumes they are there as part of a protection racket. In exchange for food, Bob reveals himself and leads them on a chase back to Level 1 of Baudway. During the pursuit, a Game arrives. Bob makes it into the Game after tricking Hack and Slash into stopping long enough to crash into the descending Game wall.

The Game is a medieval fantasy, Castles & Knights. Bob reboots as a knight, as is the User, the White Knight. Dot's voice can be heard calling for help from a distant castle. Bob acquires a dragon from a nearby barn and rides it out of the starting town, but the White Knight jumps onto it from the town wall. Bob knocks him off, but another dragon swoops in and catches him. The White Knight chases Bob along a canyon, shooting fireballs at him. Bob's dragon, which is mechanical, turns out to be operated by Al's Waiter and Al.

After Bob's dragon manages some counter-fire, the fight changes to jousting and Bob knocks the White Knight into the canyon. Telling Al's Waiter to keep the White Knight busy, Bob enters the castle and finds himself in a room with a skeletal warrior impaled with a sword. Bob takes the sword, but the skeleton comes to life and attacks. They swordfight until a spike pit opens in the floor; Bob is disarmed and forced to jump into the pit, but catches the edge and commands Glitch to form a large vidwindow inside the skeleton's rib cage, exploding it.

Bob follows Dot's cries for help up a staircase to a tower. At the top, he discovers that the "damsel" is in fact Enzo, who is equipped with a megaphone which makes his voice sound like Dot's. Dot turns out to be rebooted as another knight, and bursts into the tower room, perfectly healthy and locked in combat with the White Knight. Bob attempts to assist, but the White Knight's mace breaks his sword. Throwing the broken sword, he discovers the White Knight's weak spot is his icon. Dot targets it until she tires, whereupon Enzo throws his megaphone at it, finishing the White Knight off and winning the Game.

Back in Baudway, Dot explains that she and Al are business partners, and she simply vidwindowed for a delivery. Megabyte appears with Hack and Slash, having seized Enzo. Megabyte demands Bob return the magnet; Bob uses Glitch to throw it at him, partially erasing him and knocking him off a ledge into the lower levels. Hack and Slash jump after him. Bob asks whether there is anything in Mainframe that Dot doesn't own; Dot's answer is evasive.

"The Quick and the Fed - Giant Magnet" by Bob Buckley 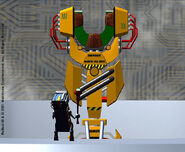