When business is slow at Enzo's new delivery service, he secretly accepts a job from Megabyte to deliver a package to Hexadecimal. —ReBoot: The Definitive Mainframe Edition

Enzo has just started a new business, Enzo's Overwrite Delivery Service. He enthusiastically informs Dot and Bob how well it is going, but in fact has no customers at all yet and is privately feeling discouraged.

A short while later, Megabyte vidwindows Enzo and hires him to deliver a package to Hexadecimal. After the call ends, while Megabyte is laughing to himself, Scuzzy is seen spying on him.

In the Diner basement, Bob finishes mending a tear. Enzo approaches and tells him and Dot that he got his first order, and mentions that it is for Hexadecimal.

Dot and Bob stop Enzo outside before he can leave. Dot asks who sent the package, but Enzo lies. Bob X-rays the package, revealing a mask with a clock in the forehead reading "30". Dot and Bob declare Lost Angles too dangerous for Enzo, but rather than let him give up on his business, Dot tells Bob to deliver the package this time.

Scuzzy reports back to Hexadecimal and displays a recording of Megabyte plotting to hide a delete command in a mask and have it delivered to her. She resolves to delete both Megabyte and his "delivery boy" in retaliation.

Enzo follows Bob to Lost Angles. After some hijinks, Bob is dropped down a hole in the ground and ends up in Hex's lair. He gives her the package and she opens it; feigning surprise, she says she already has a mask and Bob will have to return it to Megabyte. Bob declines and attempts to leave, but Hex puts the mask on him (starting the countdown and preventing him from speaking) and throws him out of the lair entrance hole on a trajectory for Silicon Tor. Enzo stops the hole from closing and overhears Hex monologuing that Bob should reach Megabyte just as the clock reaches zero, deleting them both.

As Dot sees Bob flying by over the Diner, Enzo arrives, confesses his earlier lie, and informs her of the situation. She agrees that they have to warn Bob.

Bob, nearly at Silicon Tor, finally manages to remove the mask. He has Glitch form a rotor, arresting his flight. Meanwhile, Dot and Enzo are zipboarding to meet him. Just then, a Game arrives. Bob enters it, and Dot and Enzo follow.

The Game is Formula One. Bob reboots as a racer, with the mask mounted on the hood of his car; the binomes present reboot variously as racers or racetrack staff. The race begins, with the User in the lead and most of the other cars passing Bob immediately. Dot and Enzo arrive at the starting line and reboot into racers themselves in an attempt to reach Bob.

Various racing hijinks ensue while the clock counts down. In an attempt to gain ground, Bob uses his nitro (nitrous oxide booster). Dot catches up to him using same, but he misunderstands her warning, and before she can clarify, she goes off a ramp.

In Level 2 of the Game, the cars transform into hovercraft. Enzo picks Dot up from her crashed car, and she takes over driving his hovercraft; however, after the User deposits a minefield (which Bob successfully navigates), the siblings' craft is destroyed.

Level 3 is air racing, although the planes fly low and continue to follow the track. Desperate to get Bob's attention, Dot drives a tanker truck onto the track and has Enzo release the tank so that it lies across the track right before the finish line. Bob gives Glitch an unknown command right before both his and the User's planes reach the tank, just as the clock reaches 0. The User plane crashes into the tank, destroying them both. Bob's plane is likewise destroyed, although it is hard to tell whether it crashes or is destroyed solely by the mask; it leaves behind a ball of blue energy which absorbs the remains of the tank explosion, growing larger in the process.

Dot and Enzo are distraught, but Bob turns out to have escaped using Glitch, and descends on a rotor while the System Voice announces, "Warning: Game corruption." Bob declares the corruption-ball to be "an infinite data else-if loop" and instructs the others to run. The loop collapses in on itself into a toroidal shape and begins to suck in everything in the Game in a manner reminiscent of a black hole. It eventually devours the Game entirely, leaving the sprites behind, unharmed. Enzo finally explains the whole situation to Bob.

As they return to the Diner, Megabyte vidwindows and fires Enzo, who is unconcerned. Megabyte declares that he has found someone else to deliver his packages; Hack and Slash arrive carrying an enormous and obvious bomb, saying that "Hexadecimal says she already has one." The bomb explodes, blowing out the top of Silicon Tor. 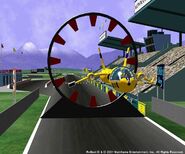